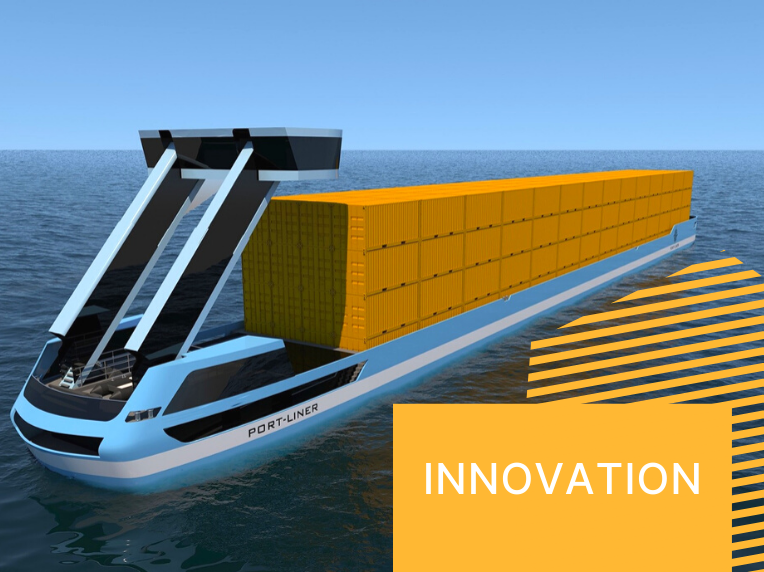 In the import-export world, the transport of goods by sea is a must. In fact, almost 90% of world trade is carried out by sea. For this reason, companies and states are competing in ingenuity to invent the container transport of tomorrow.

There are many construction sites: ecology, profitability, safety and reliability. All these elements converge to give rise to a set of exciting and relevant innovations for the international transport of the future.

The first pitfall that focuses the efforts of innovators is the fight against global warming. Sea freight is at the heart of this global effort. This is not surprising, as one giant container ship emits as many harmful emissions as 32 million cars.

One of the reasons for this massive pollution is the fuel used in ships. It contains 2,000 times more sulphur than the diesel used in road vehicles. In total, shipping is responsible for 4% of global CO2 emissions.

Fortunately, many innovations in container transport are emerging.

The use of sails for a more virtuous maritime traffic

One of the solutions in the fight against air pollution in the maritime domain is the introduction of sailing to keep ships moving.

Toulouse-based start-up Airseas has launched the project Seawing. The idea is to deploy a canvas at the front of the ship. Resembling those used in kite surfing, they should reduce the fuel consumption of cargo ships by 20%.

The company is ambitious, as it aims to create sails up to 2000 m2. These will be used on ships with an overall length of up to 400 m.

Beyond the Sea by Yves Parlier

The Project Beyond the Sea of the navigator Yves Parlier also proposes the use of such a solution.

He also honours renewable energies by using the power of the wind. The sail can thus be unfurled as required and controlled via a manual or automatic system.

Towt is a Breton company. In 2022, it wishes to make its first Atlantic crossing. Its particularity? It has designed a cargo sailboat, with a length of 67 meters.

This mode of transport will be low-polluting, as the C02 discharged will be reduced by 90% in comparison with traditional cargo ships.

What's more, this ecological dimension will go hand in hand with undeniable efficiency, as the volume of goods it will be able to transport amounts to 1,000 tonnes!

Reinventing the shape of the ship to rethink maritime logistics

Let's leave aside the sails and sailboats, and go to the side of the ship's structure itself. What if the sails were finally incorporated into the ship's architecture?

That's what the class ship is aiming at. Vindskip of the Norwegian company Lade AS.

The latter is a hybrid vessel: it operates on wind and LNG (liquefied natural gas). In concrete terms, the trick lies in the use of what is called apparent wind. This principle has long been used in the design of planes and trains. However, in the field of container carriers, it is a major innovation.

Its aerodynamic shape uses the wind to its advantage. The wind generates lift which then allows the ship to be pulled in the desired direction. Lade AS calls this technology the Wind Power System.

The other particularity of Vindskip is its cruise control. This makes it possible to maintain a constant speed, whatever the situation, by combining aerodynamic force with the use of LNG.

Finally, a weather routing module ensures that the crew can select the most economical or fastest route. To do this, the software, using the weighting of meteorological data, optimizes the angle according to the wind.

The consequences of these technological additions are significant, as the following are the gains in terms of fuel savings and harmful emissions compared to a conventional vessel:

The contribution of these innovations is therefore irrevocable and could well revolutionise our relationship with maritime transport. All the more so as Vindskip concerns all dry cargo ships: ro-ro ships, membrane LNG carriers, mixed cargo ships, PCTC (vehicle transport) and of course container ships.

Even bolder: autonomous and electrical solutions

Sails have the advantage of being able to enter the market quickly. However, it is possible that one of the long-term solutions to the pollution generated by international shipping may be embodied in electrically powered ships.

For the time being, they are designed to achieve relatively short journeys, but in the long term, they may be the ones that will allow a transition to a sustainable model.

In Norway, the defence industrial group Kongsberg and the fertilizer company Yara International have combined their efforts to develop an electric and autonomous ship.

The project aims to create a ship linking the different ports of the country. This would replace 40,000 truck trips by land.

Unfortunately, the Yara birkeland costs 3 times more to produce than a conventional cargo ship. However, the associated operating costs would be reduced by 90% as it does not require human intervention to operate.

This solution designed by the Dutch company Port-Liner takes the form of a container ship running 100% on electricity.

Its batteries are recharged in 4 hours via solar and wind energy. The process then provides the ship with an autonomy of 15 to 35 hours.

The company will eventually offer two sizes of vessels to meet the different needs of charterers:

Of course, the Liner Port looks pale in comparison to the giant container ships. However, its objective is not the same.

The idea is to use it on European inland waterways. No fewer than 7,300 vessels currently navigate on these waterways, of which more than 5,000 belong to the Netherlands and Belgium. This solution could therefore represent a real opportunity to reduce CO2 on the continent.

Smart containers and the IOT (Internet of Things)

The wealth of solutions to the problems faced by maritime transport is not limited to renewable energies.

Indeed, smart containers are the solution for a controlled and optimized end-to-end supply chain.

A complete IOT solution by Traxens

For example, the shipowner CMA-CGM and the French company Traxens have worked together to develop and deploy an IOT solution for transport containers.

The latter consists of a housing which is attached to the container. Thus, a set of strategic information is collected:

An effective response to business issues

This innovative solution is therefore ideal for managing its logistics flows more finely and reducing its operational costs. Connected containers thus offer a relevant response for managing and anticipating stocks and reducing incidents.

To succeed, Traxens surrounds himself with the greatest. Indeed, in addition to CMA-CGM and its 494 ships, the company has attracted the MSC group, which has a sizeable fleet of more than 450 boats. The future of containers will then most certainly be digitalized and they will interface easily with the other elements of a multimodal transport.

One of the pitfalls of the sea container is its inactivity. During its useful life, a container spends more than half the time in repositioning or inactivity.

It is therefore an essential point to be optimised to make tomorrow's supply chains much more efficient. However, the container Connectainer seems to be the key to solving this problem.

This simple and well-thought-out solution to a central supply chain management problem would thus avoid 12% of unnecessary container movements in international transport.

Towards the use of new materials

Finally, the future of containers also lies in the use of new materials in their creation.

This is what Stephan Lechner, a member of a European research centre based in Ispra, thinks. He believes the future lies in the development of carbon fibre containers.

This material has some interesting qualities:

Steel containers from the 1950s may therefore be history.

Blockchain technology at the service of security

Finally, how can we talk about the business issues of container transport without mentioning safety and traceability? On these issues, blockchain technology seems to be a perfectly adapted solution.

The contribution of technology to supply chain controls

Let's recall what Blockchain technology is. It is a decentralized information storage and transmission solution. The chain created by the different blocks of data is shared and distributed. This then allows each person to check its integrity and therefore the veracity of the information it contains.

Container transport is subject to various stages of control along the way, from the shipper to the end customer. During these checks (nearly 30 in international transport), the containers are opened during port examinations and documents are exchanged. As a result, all these phases can be a source of errors or malpractice.

However, the blockchain presents effective solutions to three problems related to the control and management of logistics flows.

The blockchain thus allows for greater reliability, as it improves the security and traceability of shipments. In the food industry, it is possible to quickly and easily trace the entire supply chain if a problem is detected. It is therefore a public health issue.

The fight against fraud

This technology also helps to combat supply chain fraud, which represents a significant annual global cost of $40 billion. The transparency of the system is ideal, as it is impossible to unilaterally change the data.

Finally, making use of the blockchain is putting a powerful tool at the disposal of your company. Indeed, the management of flows is improved by the automation of certain processes made possible by this innovation used in conjunction with sensors and connected objects.

A world in constant evolution

As we have seen, the world of logistics is far from frozen. On the contrary, innovative tools and technologies are multiplying. These are all effective and astonishing solutions to the problems encountered by maritime transport today.

These inventions and improvements leave us to envisage a range of opportunities for the sector in the near future, such as the introduction of non-polluting, self-contained ships, reduced transport costs, better supply chain management and improved safety and traceability.

All these elements are exciting and demonstrate the dynamism of the logistics sector, especially the maritime one, and its importance in the economic world of tomorrow.