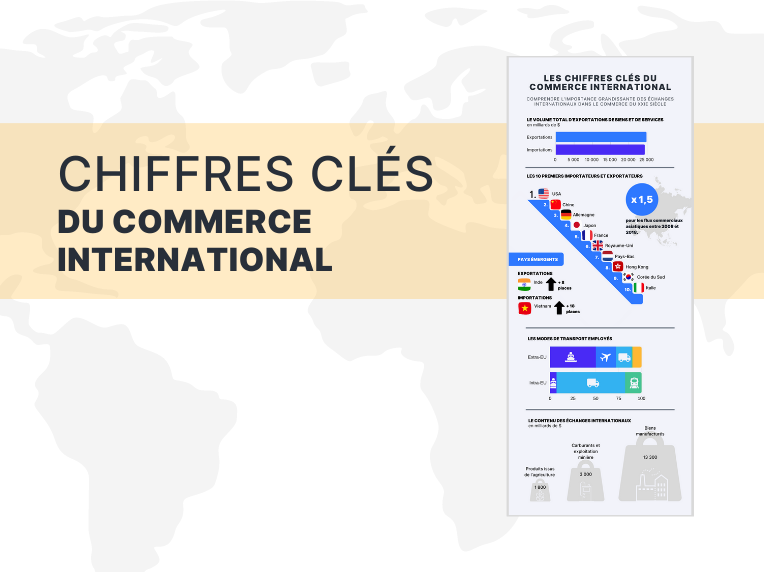 Many recent events have come upset the global political or economic balance. Indeed, the Brexit, Covid-19 or the trade war waged by the authorities... and China are creating uncertainty and tensions on the stock and commercial markets. For this reason, it is relevant to an update on world trade figures to assess the situation, and Understand the ever-increasing importance of international trade. in 21st century commerce.

The volume of global trade in goods

To start, here are some figures general information on world trade provided by the World Bank.

The main players in trade international

According to the WTO (World Trade Organization), only 10 economies account for 53.3% of world merchandise trade. This ranking is established by adding imports and exports:

The classification concerning the trade in services is pretty much the same:

At the global level, different modes of transport enable the exchange of goods and services. However, the proportion of each type of transport depends on the continent or country.

Thus, in 2018, the share of domestic freight by mode of transport in the EU-28 was as follows:

In 2014, studies have estimated that 2,200 billion tonne-kilometres the volume of freight transport within the EU.

Of course, when the continent trades with trading partners outside the continent, the preferred mode of transport remains sea freight. Indeed, the latter accounts for almost 50% of the import volume and 60% for export according to a Eurostat study.

Thus, each country, economic zone or The continent is adapting to the growth in world trade and the rise in the price of oil. exchanges by favouring the mode of transport best suited to the exchange concerned.

Volumes differ greatly depending on the types of goods or services traded.

In 2019, for example, here are in billions of dollars the share of trade in goods by sector :

As we can see, the volume The world's share of trade in manufactured goods is by far the largest.

For international trade in services, the distribution is as follows:

The ecological impact of trade worldwide

However, the global impact of economic and commercial exchanges is significant. For example, according to a publication of the Banque de FranceThe production and marketing of traded goods and services accounted for nearly 25% of harmful emissions in 2015.

However, the EU has decided to take charge by including emissions from the marine sector in the European Union Emissions Trading Scheme CO2 (EU ETS).